The "Carta di Cerrano" and AdrionPAN, a bit of history

During some seminars in the spring of 2008, in Pineto (Te), at the MPA “Torre del Cerrano”, has emerged the willingness to coordinate constantly for territorial areas. Since that meeting, the Marine and coastal Protected Areas of Adriatic, took measures to build a common network, coordinated both by the Miramare Natural Reserve and Torre del Cerrano MPA. Adriatic Sea represents a complex ecosystem. With its huge basin of influence, many different cultures, States and realities are interested. Adriatic protected areas need a close coordination in the management and programming activities. In Pineto (IT), on 8 July 2008, a new meeting occurred. In that occasion there were almost the totality of the representatives of the protected area of the Italian coasts, the national environmental associations, the major research institutes and the most interested Universities.

We met in the form of self-convocation, with the coordination of AIDAP (Italian Association of Directors and Officials of Protected Areas) in order to draw up a document of shared engagements on the coastal and marine protected areas of the Adriatic. A need, felt for years, to be able to participate in joint research, national and international, and for the exchange of useful information on management forms. Topics and problems confronted in Pineto, dealt with issues related to the needs of natural conservation and the sharing of experiences liked to sustainable development in the fisheries and tourism sectors. The meetings closed with the drafting of a document of addresses that was called “Charter of Cerrano”, in honour of the place where it was conceived but also to highlight how this document represents the will of those who work daily on the territory and feel the need to coordinate their work with new realities and different cultures. Indeed the aspect that struck most in the works of Pineto, was the interest that from many sides, and even from administration of different political colours, was addressed to the new reality of the Marine Protected Area still under construction. After two months, in the conference room of the Litoraneo Botanical Garden of the Veneto Regional Park of Delta del Po, on September 26th, the final version of the Charter of Cerrano was ratified, on the basis of a draft drawn up after intensive coordination work. The final draft represents a set of values to be shared, objectives to be achieved and strategies to be pursued, in order to implement a direct collaboration between all protected areas, of any kind and form, as long as marine and coastal of the Adriatic Sea.

In the first ratification they signed the Charter of Cerrano at least one protected area for each Italian region overlooking the Adriatic Sea.

Since then the subscription is open to all bodies that have to deal with the management of areas on which there is a form of protection aimed at the conservation of biodiversity according to the indications emerged in the international context. These are the protected areas that have subscribed to the Charter of Cerrano in its first draft: the Marine Nature Reserve “Miramare” of Trieste and the Consortium Protected Marine Area “Torre del Cerrano” of Pineto (Te), among other promoters of the initiative. And also: the Natural Park Regione Veneto “Delta del Po”- Rovigo, the Natural Park Regione Emilia Romagna “Delta del Po”- Ferrara, the Biological Protection Area “Tegnue di Chioggia”- Venice, the Natural Reserve Region Marche “Sentina”- Ascoli Piceno, the Nature Reserve of the Abruzzo Region “Calanchi di Atri”-Teramo, the Nature Reserve of the Abruzzo Region Lecceta di Torino di Sangro”- Chieti, the Nature Reserve of the Abruzzo Region “Grotta delle Farfalle”- Chieti and the Marine Nature Reserve “Torre Guaceto”- Brindisi. At the end two organisms, playing the role of technical support to the organisation, have finally joined too: the AIDAP-Italian Association of Directors and Officials of Protected Areas and the WWF Medpo-Mediterranean Programme Office. Along the entire Italian coast with Slovenia, Croatia, Bosnia and Herzegovina, Montenegro, Albania, up to Greece, all protected areas can now freely join by subscribing to the Cerrano Charter, as long as shared values and objectives are shared. And with the passing of time Adriapan-Adriatic Protected Areas Network began to develop, a stable working area between the marine and coastal protected area of the Adriatic, that are found in the values and in the objectives set out in the Charter of Cerrano. AdriaPAN borns as a bottom-up initiative that form the bottom, create that condition of stable collaboration between operators of protected areas in cross-border countries; an initiative that, regrettably, is not easy to obtain through the ordinary diplomatic channels of the interested states.

AdriaPAN moves toward the positive experience of MedPAN that between 2006 and 2009 built the main network of the marine protected areas of the Mediterranean; coordinated by WWF France regarding the IUCN initiatives. The success of that network system, even if still young, is linked to the basic formula which involves only the individual managers of protected areas, thus succeeding to convey a real interest in working together on common and shared objectives. On 6 October 2008, in Barcellona (Spain), took part the World Conference on Nature Conservation organised by the IUCN (IV World Conservation Conference-International Union for Conservation of Nature). In this context, as part of the activities of Medpan, there was a presentation on the international panorama of Adriapan.

The occasion was offered by the meeting organised by The Nature Conservancy, Federparchi and WWF France, entitled “Speeding up the establishment of a coherent, representative and effectively managed ecological network of marine protected areas in the Mediterranean?” ”

AdriaPAN from that moment has started officially their own activities in the international context and on the basis of its founding act, the Charter of Cerrano, activates the preparation of projects of common interest for all protected coastal and marine areas of the Adriatic Sea.

Discover the interactive map of the AdrionPAN Network 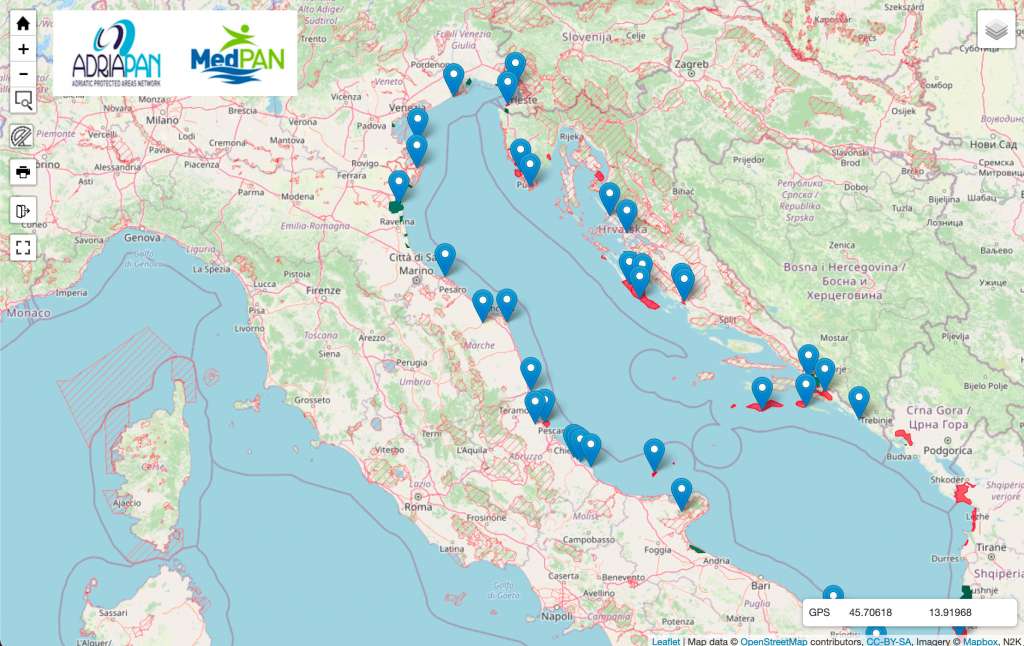